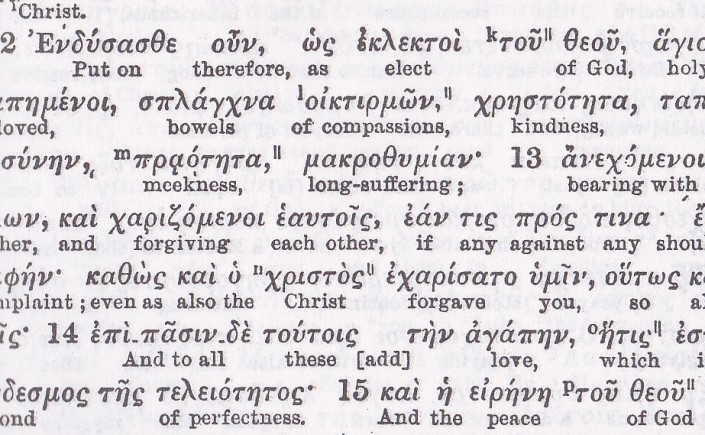 The biblical idea of forbearance is an underappreciated metaphor for divine grace and an underutilized concept for capturing how Christians ought to replicate that grace in the project of living together in community. To be sure, not much has been made of this idea in classical or contemporary biblical commentary. In his commentaries on Ephesians and Colossians, for instance, John Calvin leaves the term “forbearance”—the Greek anecho meaning “to bear with” or “to hold up”— without comment, skipping past it on his way to elucidating other parts of the passages where it appears (Eph. 4:1–3 and Col. 3:12–14). Similarly, most modern commentaries do not linger on the idea of forbearance as the linchpin for these passages.

Perhaps one of the reasons for its current unpopularity is that the term sounds like a call to yield, which unsurprisingly is not what people want to hear when they are embroiled in protracted disagreements over convictions they consider essential to Christian faithfulness. A couple of years ago, in the run-up to the latest denominational battle over same-sex marriage in the Presbyterian Church (USA), the faculties of two seminaries—Columbia Theological Seminary (GA) and Austin Theological Seminary (TX)—issued statements calling for forbearance in the debate. Insisting that schism in the church is a “profound pastoral and theological problem,” the Columbia and Austin faculties implored their fellow Presbyterians to bear with each other in the debate over amendments to the denominational constitution that would allow ordained ministers to officiate at same-sex marriages. In particular, the Columbia Seminary statement notes the way tag-words like “purity” and “inclusivity” have been weaponized in an increasingly hostile ideological environment. Calling on Presbyterians to repent of this hostility and work constructively toward a healthier future for the church, the Columbia faculty modeled this attitude by disavowing their own contributions to the polarization in the PC(USA). Citing biblical authority and denominational precedent, both statements argued that a spirit of forbearance, of “endeavoring to hear and take seriously the convictions of others,” was the only way to forestall further division in the church. Indeed, they suggested that a spirit of forbearance in this controversy would testify to the true source of the church’s hope, the One who calls the church together.

Predictably, the seminary statements were pummeled in the denominational press, from both sides. Conservatives read the statements as a call to abdicate our responsibility to preserve what they perceive to be biblical teachings on sexuality. Liberals chastised the faculties for abandoning their responsibility to give voice to justice for LGBTQ Presbyterians. For both sides of the debate, the call for forbearance sounded like an appeal to abandon truth and justice in the name of passive nicety or a gradualist pursuit of consensus. Sadly, the statements failed to make a clear impact on the debate that summer.

Neither side construed an accurate reading of the moral vision the faculties of these two seminaries were inviting Presbyterians to adopt. I know that an artificial abandonment of debate is not what I have in mind when I commend forbearance. Perhaps part of the explanation for the misreading can be attributed to form. As a genre, the brief public statement could not offer an adequate theological argument; it could not provide the conceptual grounding to understand forbearance as an expression of theological integrity and ecclesiastical faithfulness. (Providing that grounding is what I hope I do in my book.) And to be fair, the Austin Seminary statement does suggest that the church wait for a greater consensus on these matters to emerge, a suggestion that could be interpreted as gradualist obfuscation of the struggle for justice for LGBTQ Christians. But much of the push-back the faculty statements received was rooted in the popular assumption that the pursuit of truth and justice must be engaged as a no-holds-barred contest, that the exercise of forbearance and the pursuit of conviction are mutually exclusive—you cannot have both.

To be clear, I am not suggesting that forbearance is necessary because conflict itself is a bad thing. Forbearance is not built on a fear of conflict, but on a desire to work through conflict in a healthy way. Surely it is impossible to completely avoid conflict in any human community, even a church. Conflict is a natural by-product of an association of persons who are not carbon copies of each other. Human communities, to the degree that they host any diversity at all, are bound to experience difference and conflict. An ethics of forbearance that depended on the elimination of conflict would be fatally unrealistic.

In fact, not only is conflict inevitable but it can also be a positive force. Conflict can bring differences out in the open, challenge assumptions, and inspire creativity and progress. Conflict can bring attention to strained convictions, expose injustices, and contribute to a healthier and fairer community. As theologian Beverly Harrison once wrote, a society that does not get riled up from time to time is one that does not morally care about anything (“The Power of Anger in the Work of Love: Christian Ethics for Women and Other Strangers,” in Making the Connections: Essays in Feminist Social Ethics, ed. Carol S. Robb [Boston: Beacon Press, 1985], 14–15). In a society whose citizens care deeply about truth and justice, conflict is the inevitable consequence of incompatible but equally passionate perspectives.

Similarly, a church that does not care enough about anything to be conflicted is one that does not take seriously its commitment to belief, character, mission, or duty. The practice of forbearance represents an attempt to take inevitable conflict and live with it in ways that are constructive rather than destructive. Stanley Hauerwas’s representation of an Anabaptist understanding of church conflict seems apt for all of us: “That conflict is part and parcel of Christian unity means that the unity of a church is not a unity based on agreements, but rather one that assumes that disagreements should not lead to division but rather should be a testimony to the existence of a reconciling people” (Approaching the End: Eschatological Reflections on Church, Politics, and Life [Grand Rapids: Eerdmans, 2013], 109).

The cultivation of forbearance assumes a community of Christians who care deeply about matters of belief and practice, and it does not require ambivalence to principle in order to extend forbearance to others. If anything, to talk of “bearing with” another implies that we often remain unconvinced by their opposition to us. But the physical connotation embedded in “bearing with” another lends us the image of carrying one another through difficult times, and this mutual accord speaks to the distinctive Christian character of the approach to conflict I am commending. Forbearance is more than a modus vivendi, an ideological cease-fire. It is instead a positive commitment to living with the productive discomfort of difference as a reflection of the grace of God.